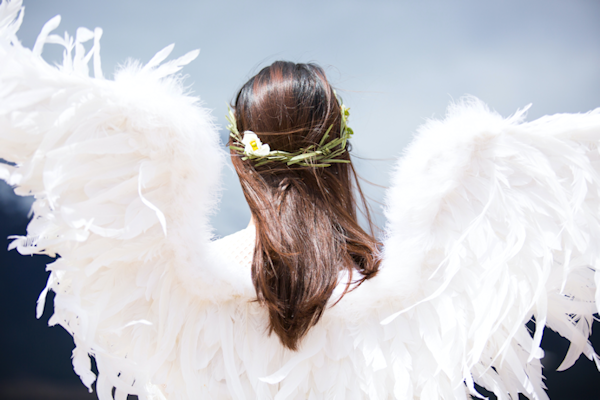 We all love Clarence, Angel Second Class, in the classic movie It’s a Wonderful Life. Clarence was a person who lived over 200 years before George Bailey. Clarence had died, gone to heaven, and was working his way up the angelic ranks. If he could help George through his crisis, he might earn his wings. In the end, a bell rings, and we all cheer for Clarence, who got his wings.

This idea of people becoming angels is prevalent throughout our culture. The angel in the television show Highway to Heaven was a man who had gone on to be a probationary angel and sent back to earth to help people. We hear this idea in many songs. And how many times have you heard someone say at a funeral, “Well, heaven just got a new angel.”

However, this is not what scriptures teach. Angels are created spiritual beings, “ministering spirits, sent out to provide service for the sake of those who will inherit salvation.” (Heb 1:14, NASB). They are sometimes referred to in the old testament as “sons of God” (Job 1:6, 2:1).

In Ezekiel 28:11-19, a passage generally understood to refer to Lucifer in his unfallen state, states that he was created. “You were the anointed cherub who covers,” v14 (an angel). “On the day that you were created,” v13, “From the day you were created”, v15.

It isn’t clear exactly when the angels were created, although we know it was before man. We know Lucifer was present in the original garden of Eden. “You were in Eden, the garden of God,” (Ez 38:13, NASB). In Job, God says to Job, “Where were you when I laid the foundation of the earth? Tell Me, if you have understanding, Who set its measurements? Since you know. Or who stretched the measuring line over it? On what were its bases sunk? Or who laid its cornerstone, when the morning stars sang together and all the sons of God shouted for joy?” (Job 38:4-7, NASB) Clearly, the angels were present at or before the creation of the physical universe, before any man had been born.

Angels do not procreate (Matt 22:30, Mark 12:25), so it appears the number of them has not changed since they were created.

Man has a completely different nature than angels. Man was created in God’s image (Gen 1:26,27), with a body, soul, and spirit (I will talk more about the nature of man in a future post). When a new testament believer dies, their spirit leaves their physical body and goes to be with the Lord (1 Cor 5:8). But there is coming a day, at the resurrection, when all people will receive a new body (John 5:28,29). This is not the case for angels. They are spirits, and nowhere in scripture does it mention angels having physical bodies that die and are resurrected.

Man’s relationship with God far exceeds that of angels, and there is no reason to even desire to become an angel (even if we could).  “But when the fullness of the time came, God sent His Son, born of a woman, born under the Law, so that He might redeem those who were under the Law, that we might receive the adoption as sons and daughters. Because you are sons, God has sent the Spirit of His Son into our hearts, crying out, “Abba! Father!” Therefore you are no longer a slave, but a son; and if a son, then an heir through God.” (Gal 4:4-7, NASB) Those who are born again are adopted children of God, joint heirs with Jesus, with the Holy Spirit residing within.  Angels have none of this.  They are servants of the King, not family.

So, while the idea of people going on to become angels may make for entertaining stories and songs, I am convinced the Bible teaches something different. In my world of Cross Intents, angels are a different class of being than humans, they have different roles, and they have a different relationship with the King.